JJ Watt Reloaded: How The Dominant D-End Rebuilt His Body For The Long Haul

J.J. Watt Reloaded: How The Dominant D-End Rebuilt His Body For the Long Haul

After his third surgery in nine months, J.J. Watt decided in the fall to unflinchingly follow his doctor's orders: No training for two months. No football, no weights, no running.

That's when the NFL's most renowned gym rat determined he "was going to be the best damn walker that there ever was."

While banned from working out and recovering in October and November, Watt lost 20 pounds back home in Waukesha County, Wisconsin. But boy, did he walk. Twelve miles a day. He'd pick a restaurant six miles away from his home or drive to a spot six miles from a restaurant of his choice, park his car and walk both ways.

"There's nothing that will get you through a 12-mile walk like being able to think about food for the first six miles and then being able to reminisce about your meal for the next six miles," he said.

It's quite an image: the NFL's most dominant defensive player, a hulk of a man, just plodding along the side of the road—against traffic to limit exposure—in suburban Milwaukee while his teammates battle without him, 1,000 miles away.

"After two months of doing it, people were like, 'Ah, there's that moron walking down the street.'"

"That moron" is now running, full speed. He's box-jumping 62 inches and bench-pressing 500 pounds. He's been cleared to practice regularly and resume a typical offseason routine. Watt is working tirelessly just to regain what he had before his body failed him. It's a tall, heavy task, even for a 6'5", 283-pound battering ram of a man.

The three-time Defensive Player of the Year didn't miss a game during his first five seasons in the league, but he played with torn muscles in his torso, groin and upper legs in 2015 and underwent major surgery following that 17.5-sack campaign. 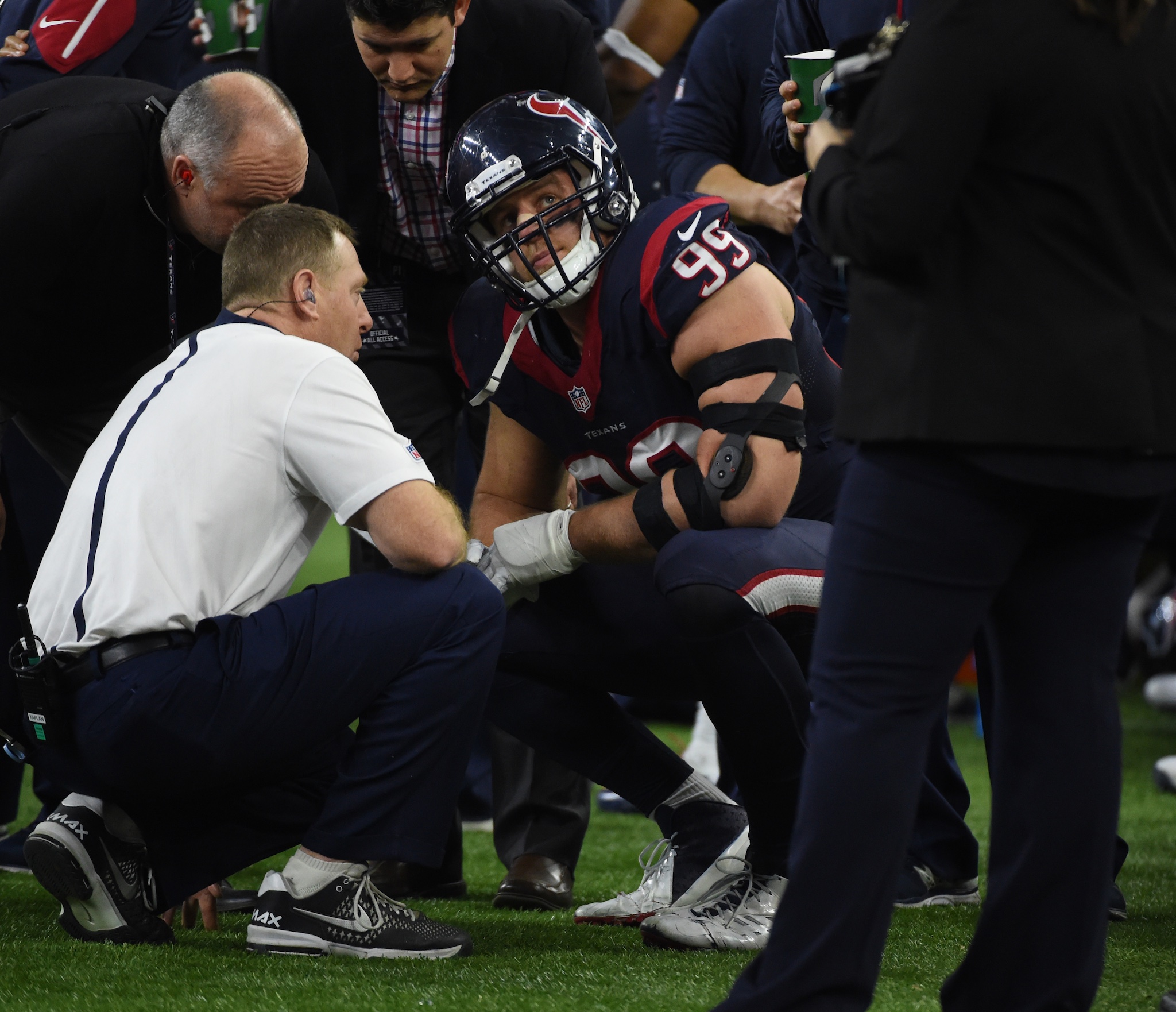 In July, he went under the knife again to repair a herniated disc. He tried to rush back to play in 2016, but then he reinjured his back three weeks into the year, begetting the September procedure which ended his season. Not being able to play took a tremendous emotional toll on the 27-year-old, who had free time in the fall for the first time in his adult life. "When something you love is taken away from you, you really realize how much love and passion you have for it," he said.

But once he shut it down, Watt finally had a chance to rebuild his body without a sense of urgency.

"Trying to get back as fast as you can to help your team out, you push it and you do things that are within the program but you should take a little more time on," Watt said. "Whereas having the surgery in the middle of the season and going on [injured reserve] really gives you that window to be able to rebuild properly and make sure that you do it patiently but aggressively. If I need an extra day for something, I need an extra day."

To accomplish that rebuild, Watt devised a recovery plan in the fall with his longtime trainer, Brad Arnett, as well as members of the Texans training staff.

"He knows my body just as good as I know it," he said of Arnett, who started training a teenaged Watt 12 years and 85 pounds ago, before the 15-year-old knew how to lift weights. "He knows exactly how we need to rebuild it and how we need to get it to its peak performance level."

You are what you eat

A lot of that rebuild takes place outside the weight room. Watt, Arnett, Texans trainers and the folks Watt works with at the Gatorade Sports Science Institute all know that training goes to waste if not for a proper diet. When you train for several hours every day and you're already the size of a small horse, you're required to consume a comically large amount of fuel.

Watt eats five or six meals per day, totaling 8,000 to 10,000 calories. About 95 percent of that diet is whole food, and he supplements with Gatorade bars and powders.

"I'm on a program right now that's working on building lean muscle mass without building [much] excess body fat," Watt said. "It's all about just eating the right way—it's making sure my carb, my protein and my fat intake is at the right level, and making sure I refuel within my workouts properly with Gatorade and [supplements] of that nature."

"They dedicate themselves in the weight room and on the field as well, but you don't always see that intensity being applied to recovery and nutrition," said Davis, noting that muscle protein synthesis increases for up to 24 hours after a workout, not just right away. "What an athlete is taking in within 24 hours after a workout—especially the amount, type and timing of protein—will have clear implications as far as just promoting adaptation for muscle hypotrophy and for strength gain."

Of course, athletes who are attempting to recover from injuries have to treat their bodies differently than those who are fully healthy.

"Every nutrition plan should be individualized, whether it's for a healthy athlete or an injured athlete," said GSSI Scientist Ryan Nuccio. "But when it comes to a severely injured athlete who is immobilized, strength and muscle mass can inevitably decline because of inactivity."

Recovering athletes who are immobilized have to avoid nutrient deficiencies and strive for energy balance, according to Nuccio, in order to support injury recovery and minimize muscle loss. That usually means more protein, because an injured body doesn't respond as favorably to that crucial group of compounds.

Davis, Nuccio and GSSI Scientist and Biochemist Corey Ungaro also note there's a misconception that a healing body doesn't require as many calories. Energy expenditure while healing may increase up to 50 percent. However, the degree to which it may increase is dependent upon the injury itself, which means that while Watt didn't typically pound 10,000 calories per day during his rehab, he did have to keep eating in order to compensate for that extra expenditure.

That's where shakes, powders and bars can come in handy, but those in the know will always tell you that whole foods should remain the focus of any athlete's diet.

From an exercise standpoint, Watt's rebuild starts at 6 a.m. every day with a training session in which he spends as much time getting loose as most of us do working out. When Watt and Arnett work together every morning in the offseason at Arnett's training facility, NX Level Sports Performance in Waukesha, the warm-up alone takes 30 to 40 minutes. In order to promote balance and ankle stability, it's shoeless. Then the shoes go on for 30-40 minutes of movement exercises and 30-40 minutes of weightlifting, culminating in a 15-minute cooling-down period.

In Wisconsin, Watt works on an NX Level program that is similar to those used by Arnett's regular clients. The difference is the level of intensity. Watt is a special defensive end in that he plays every down and dominates as both a run-stopper and a pass-rusher. He and Arnett do a tremendous amount of work on his core in order for him to take on 320-pound offensive linemen when defending the run, along with plenty of speed work in order help him get off the edge as fast as anybody in the game.

An average workout consists of repeat box jump drills at 58 or 59 inches, power clean reps at 380-400 pounds, back squat reps at about 700 pounds and bench press sets between 400 and 500 pounds. But Arnett notes that those aren't Watt's max weights. Instead, the focus is on reps and variation.

For a while it was just about "getting functional again," according to Watt, who has almost regained all of the weight he lost in the fall. "But now I'm back to really fine-tuning everything like a normal offseason workout." 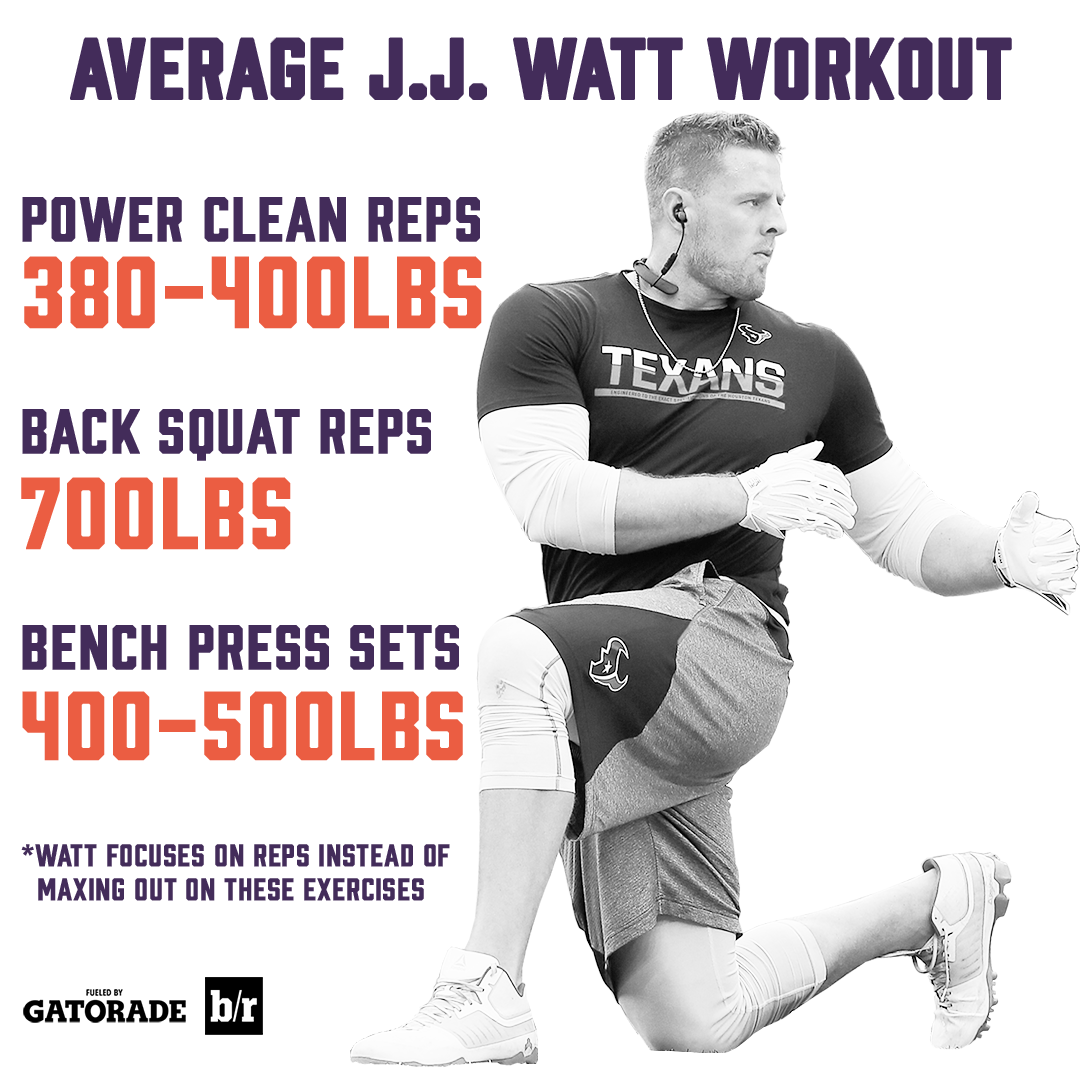 It's a team effort, but none of it happens if Watt doesn't possess the kind of drive that causes a guy to walk 12 miles for lunch.

"In the chaos of it all, it's easy to forget how as a kid, you dreamed about this. It's easy to lose that passion, lose that excitement, lose all that special feeling," Watt said. "It's really cool and really awesome to have that back, and it's just a phenomenal feeling to be able to wake up every day and work toward the job I love."

That's what moved him from a 12-mile walk to a daily proverbial sprint—a chance to return to his canvas and add to his legacy. If all goes to plan, in 12 months' time we'll be referring to J.J. Watt as a four-time defensive Player of the Year, 2017 Comeback Player of the Year and, of course, the best damn walker that there ever was. 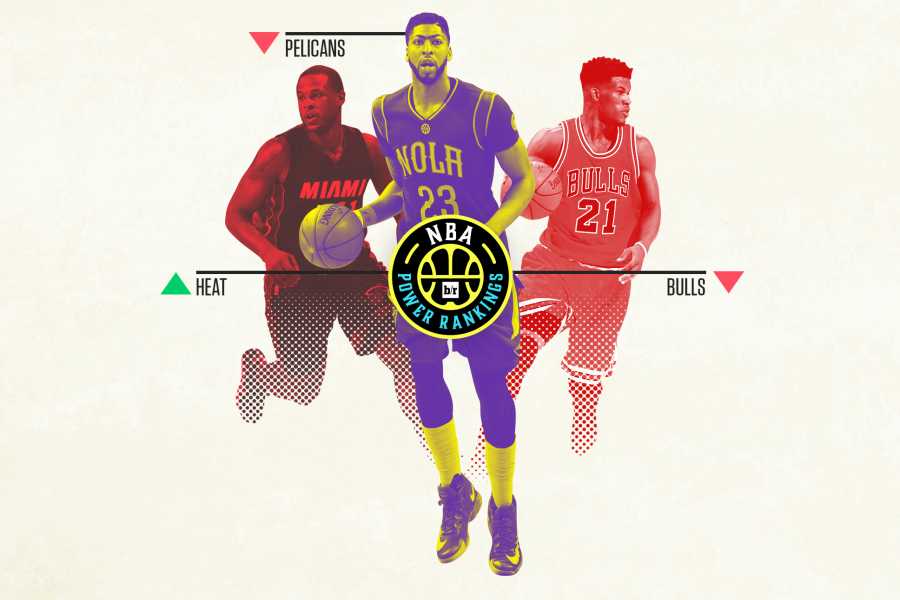 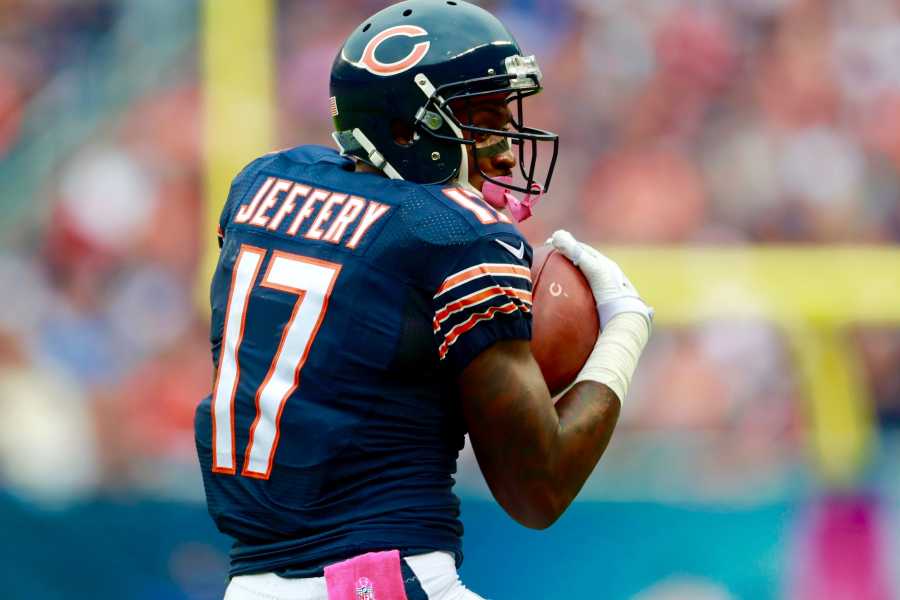 Winners and Losers from Day 1 of Free Agency 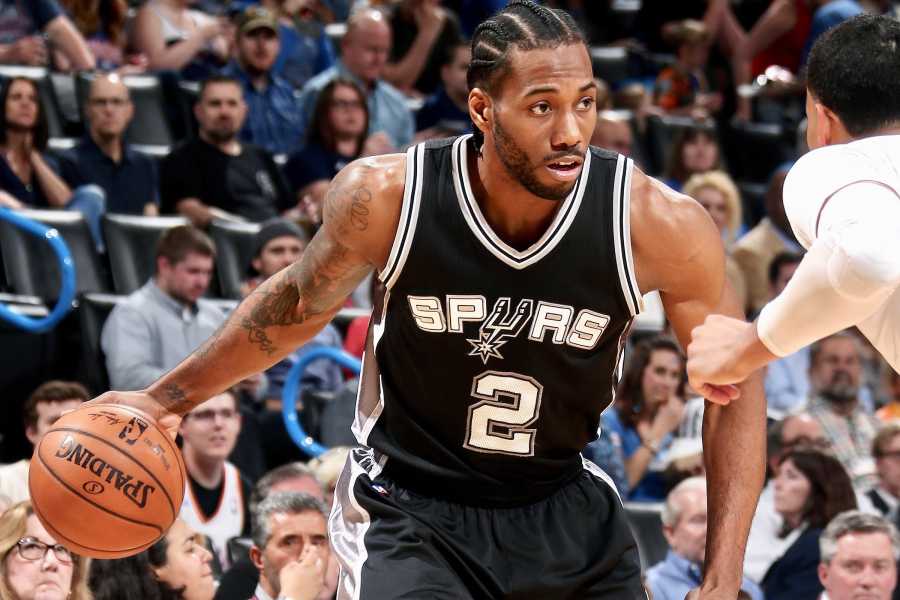 Spurs Will Be Fine with or Without No. 1 Seed 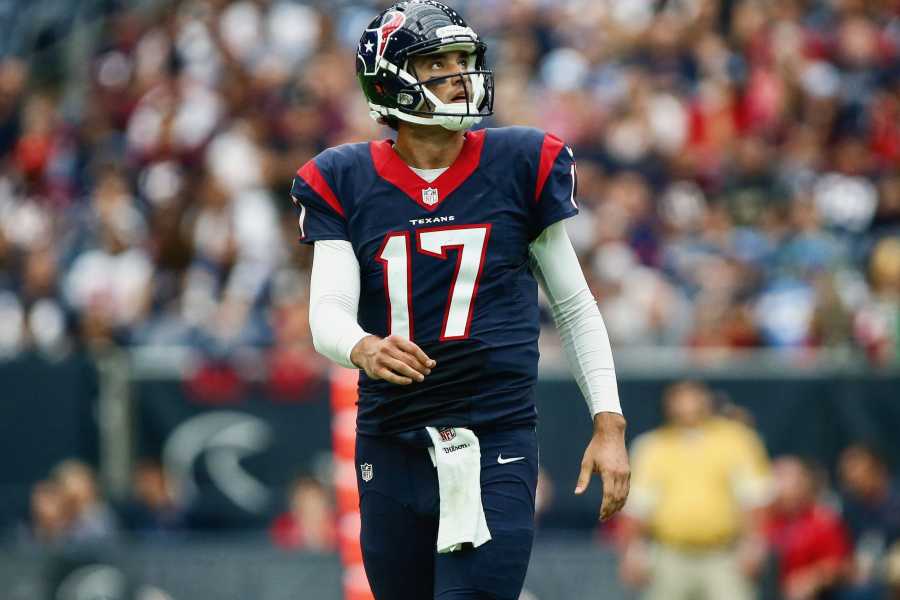 Browns May Know What They're Doing After All 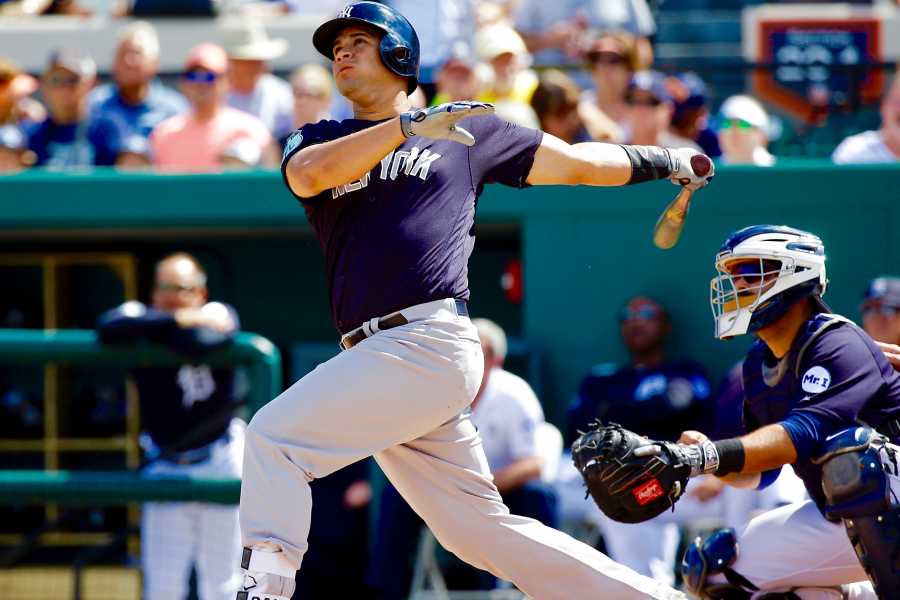 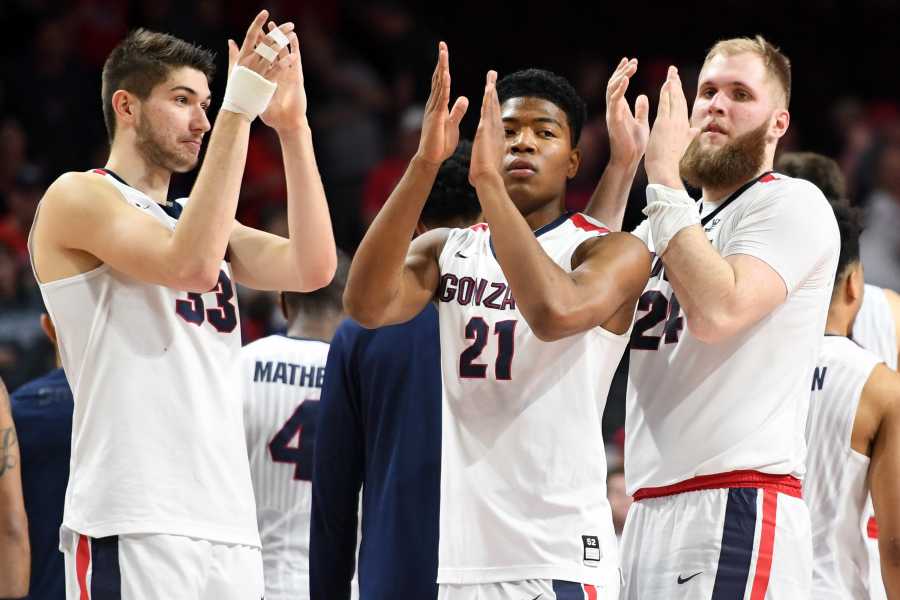